The concern about indoor air quality has grown, not only in air-controlled environments such as pharmaceutical manufacturing areas, hospitals, and food processing facilities, but also in homes and workplaces. Deteriorated indoor air quality may cause adverse effects such as allergies, asthma, or sick building syndromes. Therefore, controlling the microbiological quality of the air is essential and several sampling methodologies have been widely employed. This leads us to the origin of IUL's air sampler Spin Air, an internal impaction-based indoor air sampler with a groundbreaking technology able to identify and quantify airborne microorganisms with an unbeatable accuracy and precision.

The principle of the rotating Petri dish in the Spin Air allows to have a real count avoiding the use of colony count correction tables. Other single-stage inertial impaction samplers are static systems, which only allow the use of 5% of the total surface of the agar.

Thanks to its innovative rotation motion device and its special distribution of the holes, Spin Air uses the 100% of the Petri plate agar surface to plate microorganisms, increasing the reproducibility between samples.

IUL's Spin Air used without rotation (0 rpm) requires a correction on the result to be applied, like other single-stage impaction-based air samplers for bacteria quantifications. The correction considers the probability that one microorganism travels across the same hole as a previous one. This correction is not important at low counts but becomes dramatically higher when there are more than 150 CFUs per plate.

As a result, the Spin Air technology enhances air sampling accuracy, precision, and resolution even when sampling in mid or highly contaminated environments (particularly useful for GMP Grade C and D cleanrooms and regular environment sampling). 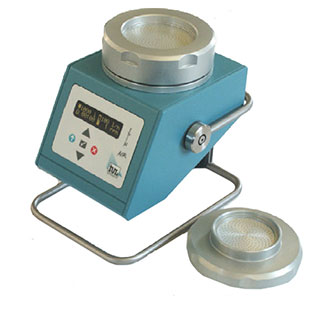 Air sampling - Why IUL's Spin Air is the best option

This kind of device has an integrated sampling pump fed by an internal battery, which makes it independent of the electrical network. What's more, since it is light, silent, and easy to carry, it serves as a portable multi-hole impactor and is useful for indoor sampling in offices, hospitals, schools and even remote areas.

A comparison: weakness and strengths between single-stage impaction-based samplers 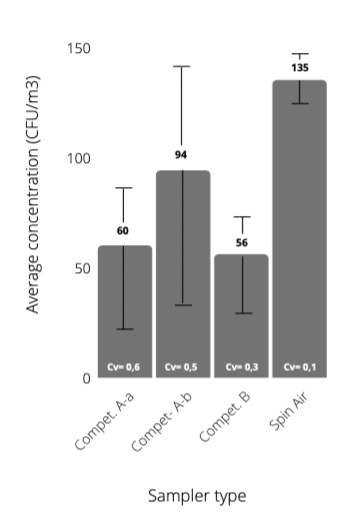 What makes IUL's air sampler unique? Studies have shown that Spin Air is the most precise single-stage inertial impactor and recovers a higher number of colony-forming units. Consequently, the Spin Air is better for indoor-air bioaerosol concentration measurements. In addition, Spin Air makes the quantification of air airbone microorganisms quicker since positive-hole correction can be avoided due to the Spin Air sampling head rotation mechanism.

While the highest number of CFU/m3 is achieved with the Spin Air sampler, at the same time, the error and the coefficient of variation (cv) are the lowest. In contrast, the other devices have a higher CV and studies point out that this could be for unequal flow distribution, especially in those devices with two sampling heads and one aspiration pump. This problem is solved with the Spin Air, which has one main head and has the possibility to use an attached sampler with its own aspiration pump.

To sum up, in order to standardize indoor-air sampling methods for airborne microorganisms the performance of the air sampling devices must be characterized.

The portable high-flow single-stage impaction-based air sampler for bacteria sampling Spin Air gives the highest concentration with the lowest data dispersion and therefore it is the most precise, accurate and reproducible.