What is Water Activity?

Wikipedia describes Water activity as an element amount used to symbolize the energy status of the water in a system. It is determent as the vapor pressure of water above a sample divided by that of pure water at the same temperature, consequently, pure distilled water has a water activity of exactly one. It is extensively used in food science as a easy, clear-cut measure of the dryness of food, foods characteristically have an optimum water activity at which they have the greatest shelf life. Water activity is also used in the pharmaceutical production and chemicals for moisture sensitive products.

There are few factors that decide the water activity of a material. Colligative effects of disband species (such as sugar & salt) cooperate with water during attraction, ionic bonds and hydrogen bonds. Capillary effects also manipulate water activity, since the vapor pressure of water above a curved liquid meniscus is less than that of pure water. Surface interactions, in which water interacts directly with chemical groups on un-dissolved ingredients (i.e. starches and proteins), can also have an effect on water activity. The interaction can be through ionic bonds, van der Waals forces, hydrophobic interaction and hydrogen bonds. These reasons combine to boost the energy required to cause the water to fade away, and as a result reduce the humidity above the sample at equilibrium. These factors can be grouped under two broad categories: osmotic and matrix effects.

Due to changeable degrees of osmotic and matrix interactions, water activity describes the continuum of energy states of the water in a system. The water appears "bounded" by forces to varying degrees. This is a continuum of energy states rather than a static "boundness". Water activity is sometimes defined as "free", "bound", or "available water" in a method. Although these terms are easier to conceptualize, they fail to adequately define all aspects of the concept of water activity.

For example, if honey (aw ≈ 0.6) is exposed to humid air (aw ≈ 0.7) the honey will absorb water from the air, the movement of water from soil to the leaves of plants, and cell turgor pressure. Since microbial cells consist of high concentrations of solute surrounded by semi permeable membranes, the osmotic effect on the free energy of the water is important for determining microbial water relations and therefore their growth rates. 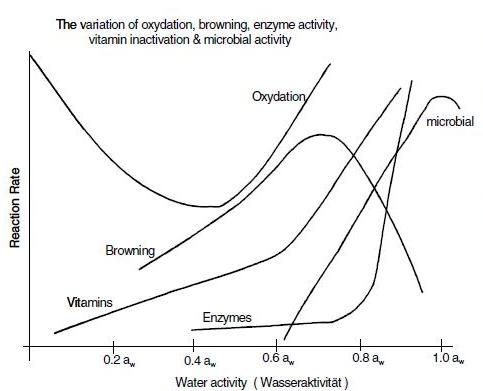